In light of International Remembrance Day for Lost Species, I’m proud to be a contributor of Driftfish, a new marine life themed anthology put out by Zoomorphic, a UK magazine and micropublisher dedicated to writing that deepens our connection with wildlife and the more-than-human world:

“From the hundreds of submissions that we were privileged to read from poets and prose writers from all over the world, we have curated an anthology that we hope reflects Zoomorphic’s core principle: to defend non-human species, we must reconnect our imaginations to them.”

My short story, titled “Mind of a Clam”, is inspired by Italo Calvino’s Cosmicomics, in which the late and great fabulist takes a germ of science and spins a tale around it, and by Roderick Sloan, a seafood supplier and diver from Norway who was featured in one of my favourite shows called Mind of a Chef – from which this story took its name. An excerpt:

“…The entrée won’t be coming for a while, so we have time. Time. Putting up the rings certainly gives you that, to think and mull things over. Regrets? Not really, more a yearning you could say, to have known then what I know now. Who doesn’t look back at their bachelor days now and then, to bask in that warmth of larval camaraderie, living moment-to-moment, free from form and ambition? When you’re young and adrift with the will of the world behind you, everything seems possible. But nothing lasts forever, though I am grateful for that even, especially now, near the end. Still… if I had known about the limitations that would come from settling down, on how being shelled would come to shield me in and seal me off, or how the monotony of filtering day in and day out seduces one into a life of nacreous comforts that slips away, quick as a snap… well. Let’s just say I would have relished the freedom of youth more.”

Driftfish is launching at the One Network for Conservation and the Arts Gallery (ONCA) in Brighton on December 2nd. For more details about the launch, visit onca.org.uk. Copies complete with illustrations and art cards are now available for purchase online. 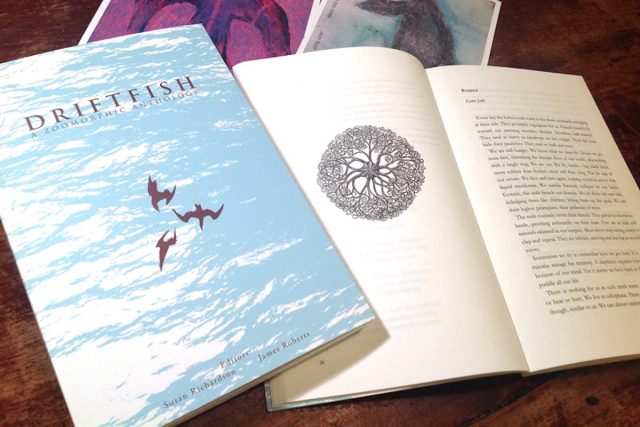 Featured image screenshot captured from Mind of a Chef.