The first place I ever felt at home in was on an island. My grandparents lived on Cheung Chau, an island ten kilometers southwest of Hong Kong. Literally translated as “long isle”, Cheung Chau is shaped like a dumbbell, its two granite masses joined in the middle by a sandbar. As a child I spent weekends and summers there fishing and swimming, and even now the scent of saltspray and sewage sends me back to that grimy old fishing village.

This fondness for islands stayed and deepened. When I moved to Canada and started to read English I found myself drawn to Earthsea, the fantasy archipelago world of Ursula K. Le Guin. On each of her conjured isles laid not only magic and adventure, but moods intrinsic to and defined by geography. I connected to Astowell, last land before the open sea; Gont and its snow-capped peak rising up like a sharp spire; Osskil, raven realm, icebound and alien. Many times I have sailed in my mind to the shores of Selidor at the westernmost edge of the world, that farthest shore where dragons dwelt.

I have been fortunate enough to have visited islands in real life: Most of the Gulf Islands in the nearby Salish sea; Tobacco Caye off the coast of Belize; the garden isle of Kauai; and soon, Iceland and its raw and elemental landscapes. As time passes the allure of islands has only grown stronger, and I find myself more and more captivated by the isolation, desolation, and wholeness they embody and evoke. When I chanced upon Judith Schalansky’s Atlas of Remote Islands: Fifty Islands I Have Never Set Foot on and Never Will at a local bookstore, a story collection of fifty islands from all corners of the world, I knew that it was time to travel again, even if it were only possible on the page.

Atlas of Remote Islands takes readers across the globe on a journey to fifty obscure and distant islands. A few locales are idyllic and picturesque, but the majority are inhospitable due to a combination of harsh climate or the lack of natural resources. Nevertheless, each island in the collection takes on its own character, and houses its own unique stories to tell.

Atlas of Remote Islands is a beautifully crafted tome. Equipped with a background in art history and graphics design, Judith Schalansky not only wrote the text, but designed and typeset the book herself. Each island description comes with an illustrated map, a timeline detailing important historical events, and distance markers to the closest points of land, often measured in hundreds if not thousands of kilometers. Schalansky drew upon factual sources and documents to craft page-long sketches for each island. The descriptions usually consists of a series of short statements; sections are marked off by dashes but are otherwise part of a continuous paragraph, without breaks. The effect is that they read like communiques and dispatches, informing the reader only of essential details, leaving the rest up to his/her imagination. Atlas of Remote Islands employs its form to intensify the loneliness, fragmentation, and mystery inherent to far-flung lands.

Tales for the Armchair Traveller

Atlas of Remote Islands reminds of some of my favourite fictional travelogues – Italo Calvino’s Invisible Cities and Le Guin’s Changing Planes – but approached from the other side. Instead of crafting fantastic realms grounded with kernels of truth, Schalansky highlights existing locales that contain realities almost too strange to be believed. As she notes, the very nature of islands makes them ideal settings for compelling stories:

“It is, however, the most terrible events that have the greatest potential to tell a story, and islands make the perfect setting for them. The absurdity of reality is lost on the large land masses, but here on the islands, it is writ large. An island offers a stage: everything that happens on it is practically forced to turn into a story, into a chamber piece in the middle of nowhere, into the stuff of literature. What is unique about these tales is that fact and fiction can no longer be separated: fact is fictionalized and fiction is turned to fact.” (pp.19-20)

Islands can tell tales of extremes. Removed from moderating influences of nature and culture, any balance attained is temporary and precarious. Tikopia (p.116) walks the knife’s edge of zero population growth through infanticide and ritualized deaths. Easter Island (p.100) is a parable of ecosystem collapse, while the assault on local land crabs by invasive yellow crazy ants (real name!) on Christmas Island (p.64) highlights a more modern environmental threat. The fragility of islands show the importance of diversity and resiliency in our larger world, lest these microcosms prove to become accurate portents for things to come. 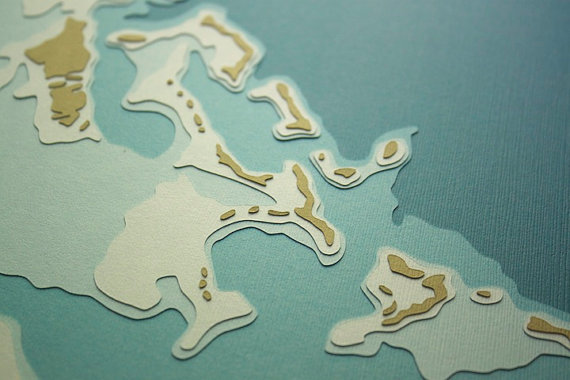 Islands can become stages for global events. St. Helena rose to infamy as the home of Napoleon during his last years in exile (p.42); Howland Island was where last contact with Amelia Earhart was made (p.76). The most famous war photograph of all time took place on Iwo Jima (p.112), while few still know of Fangataufa, the contaminated testing site for France’s hydrogen bombs (p.80).

Island stories can reaffirm humanity’s noblest impulses. The natural splendour of South Keeling Islands (p.56) shaped Darwin’s thinking about life on Earth. The splashdown of an Atlas rocket near Ascension Island (p.36) in 1960 kicked off the space race.

Yet more often than not, islands house tales of our depraved nature and shameful pasts. Inhabitants of Clipperton Atoll (p.106) suffered rape and murder at the hands of a madman after connection to the mainland was severed. The Chagossians of Diego Garcia (p.60) are still seeking the right to return home after being forcibly deported by the British four decades ago. Home to untold injustices and mysterious illnesses, desperate survival and forlorn spirits, Schalansky writes that “there is no untouched garden of Eden lying at the edges of this never-ending globe. Instead, human beings travelling far and wide have turned into the very monsters they chased off the maps.” (p. 19)

Tales Beyond The Told

“Mapmaking follows on the heels of discovery; and a new place is born with a new name. This foreign land is both occupied and possessed, and the act of conquering it is repeated on the map. Only when a place has been precisely located and measured can it be actual and real. Every map is the result and the exercise of colonial violence.” (p. 21)

To me, the most fascinating islands in Schalansky’s collection are the ones that resist our attempts to reduce them to story. They defy our claims to have power over them, leaving our expectations of what they could and should be unfulfilled. We name them Disappointment Islands (p.70) for not providing us with food or freshwater. We strive long to even pin them down on the map, as was the case for Bouvet Island (p. 46), try unsuccessfully to settle upon them, as was the case for St. Kilda (p. 34), or draw upon mythology to capture their bleak and inhospitable character, as was the case for Southern Thule. (p.50) But these motes of rock and firn care not. For the labels we affix upon them are not their true names, and the tales we weave around them are not their true stories. Islands form their own centers, existing beyond our need for meaning and purpose and sense-making. Unconquerable, they continue to speak in secret tongues, glacial and tectonic, avian and calcareous, none intended for human ears.

To me, stories exploring that recognition of the incomprehensible are the most interesting of all. 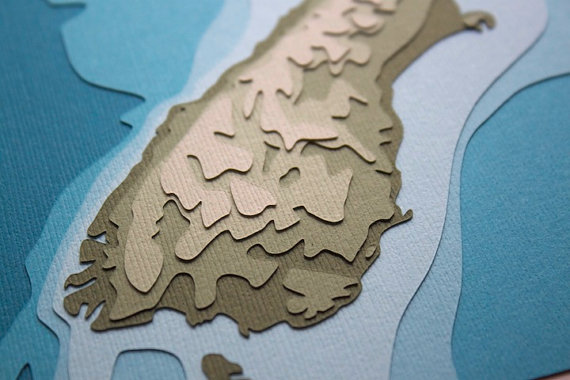 I am armchair travelling through the collection of islands again. This time I land and stay awhile on Raoul Island, whose description takes the form of a volunteer information brochure:

“The Raoul volunteer programme provides the opportunity to experience a remote offshore island and explore an unusual subtropical ecosystem. There are many challenges to living and working on Raoul. The area is actively volcanic and earthquakes are a regular fact of life. The terrain is very steep and rugged. The duties are often repetitive and exhausting. Much of the work involves weeding alien plants. // Once there, you are there for the full term of the volunteer stint. Mail is sometimes dropped by passing RNZ Air Force planes or private boats. The fastest emergency air rescue is at least 24 hours away…” (p.108)

Do I dare apply in real life? I can feel the wanderlust building already anew.

Featured image of the Hawaiian Islands with permission from Marnie Karger.

The Nature of Hayao Miyazaki