not sure how to describe Italo Calvino’s Invisible Cities. It isn’t traditional fiction on a structural level, having no story arc or a defined ending. Nor is it conventional fantasy, doing away with the worlds it creates almost as soon as it forms them. Even the broadest definitions of historical fiction and magical realism don’t quite fit, as Calvino blends real and imagined details into a concoction of seemingly irreverent tales. Invisible Cities is a travelogue to places that do not exist. It is a work that brushes aside conventions of form and narrative to ruminate on ideas of memory and place, touching on everything from trajectory of civilizations to the limits of communication. At times delightfully whimsical and intensely melancholic, Invisible Cities is a testament to the power of an author at the height of his powers to provoke, enthrall, and connect.

The story loosely revolves around meetings between an aging Kublai Khan, Tartar emperor, and a young Marco Polo, Venetian merchant. Seeking to learn about his kingdom from his seat of power, Kublai Khan orders Polo to regale him with accounts of cities that lie within his vast realm. Polo tells Kublai about cities of delight and desire, cities tinged with regrets, vibrant cities, failing cities, seemingly impossible cities that defy logic and time. Captivated but skeptical of the traveller’s tales, the emperor probes and jousts with Polo during each of their exchanges. Eventually, the merchant reveals that each of his fantastical descriptions may really be reflections of his home place of Venice…

“This is what I want to hear from you: confess what you are smuggling: moods, states of grace, elegies!”

Translated from Italian into English by William Weaver, each account of Calvino’s imagined cities resembles a prose poem. Reading Invisible Cities is akin to visiting a candy store: The selection is marvellous, the colours are vivid, flavours burst, sensations abound. Working through the chewy center of each sentence, I come across a twist in language, a shift in cadence, images combined in configurations previously unthought of. There’s never a dull moment.

I had the fortune to have the audiobook to go with the reading, and John Lee’s narration helped accentuate the expansive and lyrical text. Each fictitious city lingered long after a reading, and I find myself returning time and again to places both ethereal and vivid, to gaze up at the city of Dorothea, with its aluminum towers flanked by spring-operated drawbridges and populated by women with fine teeth (Cities and Desire 1), or to stroll the streets of Esmeralda, where cats, smugglers, illicit lovers, conspirators and mosquito-chasing swallows cut arcs across roads, sewers, and sky (Trading Cities 5).

“In the center of Fedora, that gray stone metropolis, stands a metal building with a crystal globe in every room. Looking into each globe, you see a blue city, the model of a different Fedora…”

I love gimmicks when done right, and Calvino’s cities are constructed around some marvellous conceits. Favourites include Adelma, that most distant land where one only encounters dead and familiar faces (Cities & the Dead 2); Zobeide, a city initially founded by those pursing lust and beauty that since has morphed in a labyrinth of dead-ended traps (Cities & Desire 5); Argia, a metropolis that has earth in place of air, a filled-in tomb from which doors can occasionally be heard slamming (Cities & the Dead 4).

Some of the tales dig deeper, becoming vehicles for Calvino to insert some sly or pointed piece of commentary. The monotony of Trude manifests itself at every generic airport, every constructed suburb, every downtown core with chain shops, signs, and goods (Continuous Cities 2). Ersilia exemplifies ecology as all relationships connected by strings, links that endure even as all else crumbles to dust (Trading Cities 4). Baucis is built on slender stilts with the premise that its inhabitants are either so disgusted by the earth that they avoid touching it or are so awed that they spend every moment looking down at it in awe (Cities & Eyes 3). Beersheba is a celestial utopia so tightly controlled that citizens can only experience happiness and freedom when they shit (Cities and the Sky 2). My favourite thematic tale is of Leonia, a city where residents pursue consumerism to its logical extreme, daily throwing out goods to make room for new items while trash form vast and indestructible landscapes (Continuous Cities 1).

What makes these short stories transcend mere gimmickry is Calvino’s sheer writing prowess and scope of imagination. Revelling in wordplay and ambiguous meanings, each fantastical tale nevertheless contains some kernel of insight, demands to be mulled upon and relished, to be revisited again and again.

“Clarice, the glorious city, has a tormented history. Several times it decayed, then burgeoned again, always keeping the first Clarice as an unparalleled model of every splendor, compared to which the city’s present state can only cause more sighs at every fading of the stars.”

The passage of time and the inevitability of change permeates each of Calvino’s bite-sized fables. Kublai Khan is intensely aware that his empire is fading, that power and control are slipping out of his mortal hands. He seems to initially listen to Polo’s tales as a form of distraction, not realizing that the Venetian is reinforcing the impermanence of all things through his stories of cities that fall into decay, cities that become shells when clung onto too tightly, cities that become miserable husks through their citizenry’s desire to maintain perfect and static. Calvino’s cities are not mere descriptions of fantastical physical spaces, but also temporal and historical entities that morph over time.

Primed by recent readings of Craig Child’s Apocalyptic Planet and Jared Diamond’s Collapse, coupled by the news that humanity is in the midst of the sixth mass extinction, I was struck by Calvino’s assertion that all cities and civilizations will fall. On occasion they rise again, like the aforementioned Clarice where old spaces are compressed and reconfigured into unexpected new ones (City and Names 4). Sometimes old cores blossom and expand outwards into new entities like the city of Olinda (Hidden Cities 1). But perhaps the only ones that truly endure are the ones that embrace change and derive inspiration from non-human sources, like the city of Thekla, where construction never ends, cranes are holding up other cranes, and the blueprint is the night sky (Cities and the Sky 3).

“Every time I describe a city I am saying something about Venice.”

As someone who is working out their own relationship to home and place, a lot of the most resonant passages in Invisible Cities revolve around memory and placemaking. How we recall a location and how we relate to those flashes of connection profoundly shapes our relationship with space, things, and people. Examples and insights abound within the pages of Invisible Cities. The city of Zirma speaks to the repeated and redundant objects around which memories crystallize around (City and Signs 2). The city of Zora cautions that old place memories may leave one disoriented and disappointed upon return (City and Memories 4). The city of Pyrrha is a testament to the power of names in shaping what we imagine a place to be (Cities and Names 3). The city of Phyllis highlights the arbitrary nature of attachment, noting that one place may seem more joyous solely due to a trick of light, or the sight of a girl with embroidered sleeves from a distant past (Cities and Eyes 4).

In each tale, Calvino reminds me that the cities in my mind are wholly distinct from their physical manifestations, that how I perceive and negotiate a place says infinitely more about me than it does about the space.

“There is no language without deceit.”

Communication is the central theme that permeates all levels of reading. At the beginning of each chapter, in between the tales of distant places, Calvino returns the reader to the garden in which Polo is conversing with the emperor. Initially the two communicate without a common language, with Polo recounting his tales through objects acquired during his travels, pantomimes the emperor has to interpret, gestures that signify wonder or horror. Even after Polo mastered Khan’s language, non-verbal communication continues to operate in “the void not filled with words” (p.138). 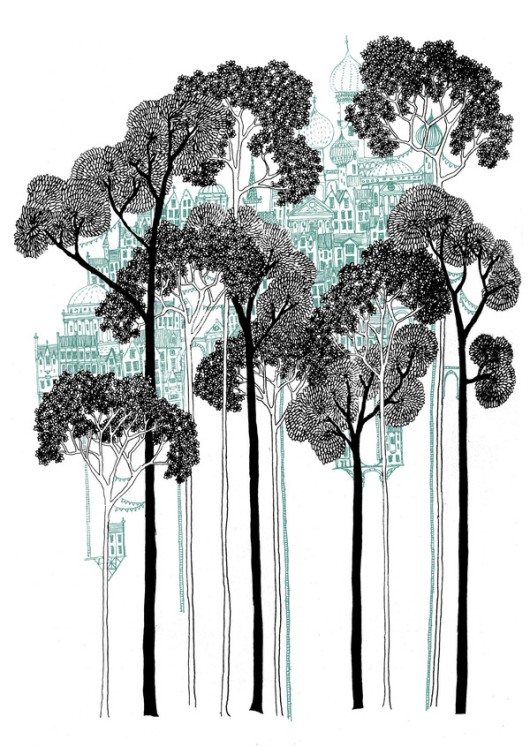 Calvino the author takes things a step further. As words begin to fail, the two chief characters continue to exchange in silence, while meditating smoking long pipes, through games of chess, during imagined conversations that may or may not have occurred. They even speculate upon the possibility that the exchange may be occurring two non-existent people:

“Perhaps this dialogue of ours is taking place between two beggars nicknamed Kublai Khan and Marco Polo; as they sift through a rubbish heap, piling up rusted flotsam, scraps of cloth, wastepaper, while drunk on the few sips of bad wine, they see all the treasure of the East shine around them.”

I love these scenes in which Calvino breaks the fourth wall to seemingly address the reader. Through these playful exchanges he explores the notion that experiences can never be fully communicated. Early on, Polo points out that the Khan can only understand his stories through his own lens, leaving out details that would be incomprehensible to a Tartar emperor with his insular and privileged experience:

“It is evening. We are seated on the steps of your palace. There is a slight breeze,” Marco Polo answered. “Whatever country my words may evoke around you, you will see it from such a vantage point, even if instead of the place there is a village on pilings and the breeze carries the stench of a muddy estuary.”

Late in the story, Polo returns to this same idea, explaining that the same stories told may say different things to different people:

“I speak and speak,” Marco says,“but the listener retains only the words he is expecting… It is not the voice that commands the story: it is the ear.”

Do people only hear and understand only what they know and have experienced? Does the story, once told, belong to the storyteller or the listener? Do stories evolve akin to an organism as author Neil Gaiman recently suggested, “obeying the same rules of genesis, reproduction, and propagation that organic matter does?” How do we perceive and connect with something that is genuinely new?

In writing this piece about Invisible Cities, I feel like I am too coming short in communicating its virtues. I accept this shortcoming, as I believe that good stories cannot be described by anything less than their entirety. All I can say is that I am glad to have stumbled across Calvino’s work, am grateful to have my mind turned over by this rich gem. Invisible Cities is why I read and why I am driven to write. I love everything about it, its experimental nature, its meditative pace, its lush language, its fantastic flights. I hope after this wholly inadequate piece,  you will be intrigued enough to take this journey, to visit each of Calvino’s non-existent but very real cities, to stay awhile and partake in dreams dreamed and shared. There’s nothing else like it.

Images with permission from David Fleck and his Invisible Cities illustration series.
Featured image”Hong Kong skyscrapers in a night of typhoon” by The Photographer. Licensed under CC0 via Wikimedia Commons.

The Nature of Hayao Miyazaki