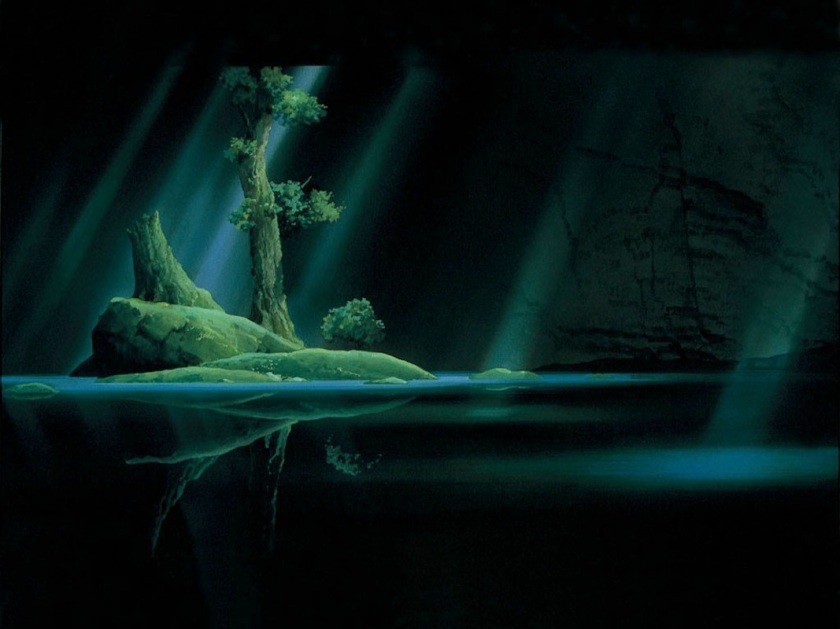 I had wanted to write a piece on Hayao Miyazaki last year after the release of his semi-autobiographical film The Wind Rises, but I was preoccupied at the time and it slipped my mind. When I finally got around to it, the moment had passed. So much had already been written about the announcement of his retirement from films. I recalled feeling sad with a tinge of soft shock, similar to the many fans around the world who knew the day was inevitable but also believed that it would never come. My feelings were complex at the time, and I thought it best to let the matter rest, trusting things would come around when I would be better able to articulate the influence he has had on my life.

Recently, I stumbled across an article in The Japan Times that sparked my interest in revisiting Miyazaki’s work. In the aptly named piece titled “A Deeper Look at Miyazaki’s Nature“, freelance writer Ian Martin provides a brief but rich synopsis on Princess Mononoke, 15 years since its North American release. Martin’s musings uses the translated art book as a launching point to outline Miyazaki’s prowess as a storyteller, exploring his propensity to situate human characters within a vaster and thoroughly more-than-human world…

“One piece of concept art depicts a river valley with a plume of smoke rising from a small hamlet. Somewhere, someone’s livelihood has been ruined. But the smoke from the burning farm is a tiny triangle in the frame, comparable in size to the tall grasses and leaves that embroider the foreground. As the image deepens, the hills and mountains dwarf this human tragedy, while white clouds take up nearly the whole upper half of the frame. The little black cloud, loaded with the import of human devastation, is a pitiful little scab signifying nothing next to the awesome physical and temporal scales in which Miyazaki’s nature works.”

– A Deeper Look at Miyazaki’s Nature

… to his knack for transcending pastoral sentimentality and mundane dramatics to tell inclusive tales that have universal appeal and weather the test of time:

“‘Princess Mononoke’ is often characterized as an environmental fable and it’s easy to see why, but it was always far more than that. In his introduction to the book, Miyazaki draws our attention not just toward the awesome majesty of nature, but also toward the social context in which the film takes place…

Yes, “Princess Mononoke” is deeply concerned with nature, but it is also a paean to working men and women. Its heroes are oppressed minorities, lepers, prostitutes, ox drivers and orphans. The traditional warriors are either comical and ineffectual or outright villainous. Where period dramas often serve to reinforce and even celebrate class distinctions, Miyazaki rips them apart with glee. He may these days like to pronounce himself tired of politics, but in 1997, at least, his inner class warrior was there for all to see.”

– A Deeper Look at Miyazaki’s Nature

As the creator of Ekostories, narratives like Mononoke are of intense interest to me. But upon further reflection, I feel that there is more to Miyazaki’s stories that I connect with; beneath a veneer of themes and ideas exists other aesthetic and esoteric layers of appreciation. As one grows familiar with an artist’s work, one becomes aware of certain stylistic leanings and eccentricities. One thing that comes to mind when I think about Miyazaki is how abrupt his endings are. His stories often exit in precipitous fashion, as if having breathed life into his worlds, he flees believing that his presence represents a hindrance to his creation’s continued growth. All of my other favourites Miyazaki films – Nausicaa, Porco Rosso, Spirited Away – lack the proper dénouements that do justice to their meticulously crafted cores. While jarring at first, I have grown to accept this practice, and have even come to become fond of it over time.

Perhaps I enjoy this quirk, despite being a stickler for defined resolutions, because Miyazaki’s creative process fascinates me; he is famous for fashioning films without any scripts. But more than this, I think the practice stands out for me because it is reflective of his personal philosophy, cultivated over a lifetime of internal struggles and imparting one crucial insight: Life will find its way and flourish in unexpected ways. And so he follows this rule in his stories, trusting that his worlds and characters will not only live on, but prosper without his guidance. There are no endings.

Yet endings compel me to ruminate upon his legacy. With no ready successor waiting in the wings, Miyazaki’s retirement most likely marks the dissolution of the internationally celebrated Studio Ghibli and the end of future feature projects beyond the few that are already in the works. The thing I will miss most about Miyazaki’s films, beyond their recurring themes around exploration, nature, feminism and humanism, is the trademark tranquil presence which permeates all that he does. For me, this attitude is encapsulated in an exchange from The Kingdom of Dreams and Madness, a 2013 documentary on Studio Ghibli:

Screencaps of The Kingdom of Dreams and Madness, by Nicholas Kole.

Here is a perfectionist who time and again pours everything into his creations, a workaholic who admits suffering from strained familial relationships as a consequence. Yet at the same time, he is also able to let go it all go and come to terms with life’s impermanence. I suspect this perspective did not come easily, for the inner peace he exudes always seems tempered with a harder bite of fatalism and resignation than I personally feel comfortable with. But here, confronted with the end of possibility, he is able to accept matters readily, willingly, without fear, with a smile. There is much courage and wisdom here that I admire.

So, a toast to an artist who faces the twilight and knows that the only power worth having, in the end, is the power to accept; to a storyteller with a long and legendary career; to a contradiction of a man who opened up new worlds to those of us born with old souls and young eyes. My respect and lifelong gratitude.