Update: I would like to dedicate this past entry to Nintendo president Satoru Iwata, who suddenly passed away in July 2015 at the age of 55. The game discussed below would not have existed without his herculean programming efforts. The videogame industry has lost one of its greatest and kindest visionaries. In memoriam.

Before delving into the next Ekostory, I want to take a brief side trip. I want to share a work is a major touchstone to my childhood. It’s one I regularly revisit over the years, and one that’s celebrating its 20th anniversary. It’s a video game called Earthbound.

“What is the video game, Earthbound?
Even today, it’s so hard to answer that question.

It was like a group of children taking dolls from a toy chest.
Old dishes no longer used in the kitchen.
Nuts and bolts found inside a toolbox.
Little flowers and leaves from the backyard.
And they were all laid down on the carpet with everybody singing made-up songs.
Ready to talk all day about that world they just made.
That, I think was how Earthbound was made.”

Chances are that you’ve never heard of this quirky role-playing game (RPG). Deemed a commercial failure in North America upon its original release, Earthbound has since gained a fervent cult following. While its fanbase is still small, few fandoms rival Earthbound devotees in sheer dedication. Businesses have been founded and books have been written around this game. A $100,000 Kickstarter project was just successfully funded for Earthbound community documentary. But what really blew my mind was one fan’s video that manages to capture the spirit of this game that’s so very dear to me:

What is it about Earthbound that can make someone spend years crafting such a tribute? Earthbound’s graphics are simple. Its gameplay is dated by modern standards.  Yet most who play it seem to know that they’re playing something special. The soundtrack is ambitious and experimental, featuring everything from jazz and electronica to ambient echoes and saccharine pop. The writing by Shigesato Itoi (described by one author as “an ad-man turned philosopher”) and translated by Marcus Lindblom, is both endearing and bizarre. Game scenarios frequently alternate between the absurd and the profound. In no other game, in no other work, have I ever encountered exchanges like these: 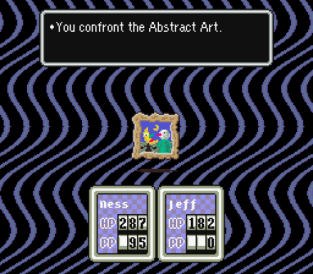 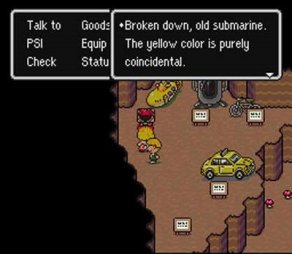 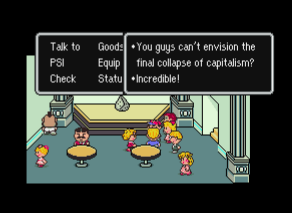 What, you mean you can’t? 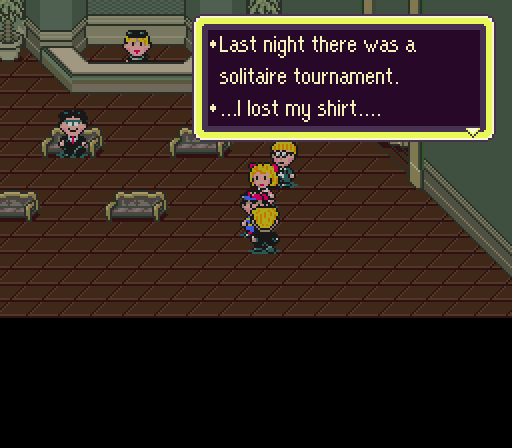 There are many things wrong with this.

A bit of Zhuangzi’s butterfly dreams in this one

Haven’t we all been there?

Earthbound features many fourth-wall breaking moments that help draw the player into its strange world, an outsider’s idyllic take on North American suburbia. It felt post-modern before I knew what post-modern meant. As I grew up, I recognized Earthbound as being brilliant satire, but I also knew that its parodies were never cruel or mean-spirited, but instead guided by a strong sense of whimsy and tender sentimentality. Earthbound is a labour of love. Perhaps that’s why my teenage self managed to connect so strongly to this game, discovering within it that ineffable quality few works manage to express, of heart.

“All sorts of people tell me about their memories,
about all the things I left in the playground called Earthbound.
From the tiny safety pins, broken pieces of colored glass to the withering leaves.
When I ask them, “how do you remember so much?”
With their eyes gleaming, they say,
“I love that world so much I remember everything about it.”
I reply right away saying “me too.”

I’m not going to talk too much more about Earthbound, because as much as I love it, it’s not really an Ekostory. My brief detour does serve a purpose, as over the next while I’ll be cover Earthbound’s sequel, a game titled Mother 3. It is even more obscure, having never officially been released in North America. But Mother 3 is crafted with the same care and skill as Earthbound, and with themes much more relevant to Ekostories: Notions of progress and change, the corruption of nature, the fragility of utopian ideals. Its tagline: “Strange, funny, and heartrending.” I hope you can join me in this latest venture.

Shigesato Itoi. What Earthbound Means To Me. Retrieved from http://earthbound.nintendo.com