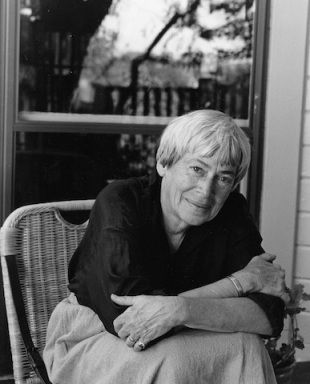 The Feminine and the Tao: An interview with Ursula K. Le Guin.

I would like to cap off the recent series of posts on Taoism with an interview with Ursula Le Guin, conducted by Brenda Peterson. In it, the lifelong student of Taoism talks about how the Tao Te Ching has influenced her personal life and the construction of her worldview. As usual, I find her comments accessible, refreshing, thought-provoking, and hilarious. Here are some of my favourite passages:

On altruism and egoism:

Brenda: Lao Tzu’s insistence on the inner authority of this discerning eye is an antidote to those of us drowning in an Age of Information. His philosophy is also a balance to the media obsession today with the cult of personality, self-consciousness, and ego. Can you talk about this?

Ursula: Lao Tzu says things like “Don’t be controlled by love. “ He says that people who don’t cherish their own bodies can’t look after other people effectively. It’s a bit shocking. Lao Tzu is anti-altruist. That’s pretty clear. Altruism and egoism are just two sides of one coin to Lao Tzu: either you look after yourself, or you turn away from yourself and look after others. Lao Tzu says no no no, that’s not where it’s at! That’s the wrong choice! You have to do both.

Brenda (laughing): Can you imagine a Taoist advertising agency? “Buy this if you feel like it. If it’s right. You may not need it.”

Ursula: There was an old cartoon in The New Yorker with a guy from an advertising agency showing his ad and the boss is saying “I think you need a little more enthusiasm Jones.” And his ad is saying, “Try our product, it really isn’t bad.”

On the enduring nature of the Tao Te Ching:

Brenda: As a product of two thousand years, the Tao has certainly proven itself an enduring spiritual text.

Ursula: It is impressive and touching, isn’t it? That this weird little book has just gone on so sturdily. All through Chinese history. It was written, during a really bad period in China’s history, the Warring States period. Society then was much less reliable even than our own. And in the middle of it, here comes this book that seems not very comforting, that seems to put everything at risk – and yet it does give comfort in a bad time. Even now.

Brenda: And that bad time in Chinese history had to do with the orthodoxy of the state Confucianism?

Ursula: War was the problem, war, violence, injustice. But Confucianism did control Chinese society so strongly that I suppose this book was necessary. The orthodoxy had grown so rigid that you had to have this anarchist Lao Tzu setting off his little firecrackers.

On the comfort of orthodoxy:

Brenda: Why do you think, in any time or culture, people are often comforted by orthodoxy?

Ursula: That’s an interesting question. I’m thinking about McDonald’s. It’s very important, for one thing, that McDonald’s wherever it is, be exactly the same as it is everywhere else. So that people don’t feel foreign, and they don’t feel like fools. They know how to order. All this is intensely comforting, because the world is really very much more threatening than most of us want to admit. And going into a strange restaurant for most of us takes a certain amount of courage, if you don’t know how to order. But the thing is, if you do go into an unfamiliar restaurant and you do get something in a foreign language and like it – then you’ve enlarged your comfort zone. And if you just always go to McDonald’s your comfort zone is so narrow and pitiful.

Ursula: You know, I think people are very brave, and are often a lot more frightened than they’re allowed to admit. Life is much harder to live for most people than we want to admit. And so many things take a summoning up of courage. It makes one’s own life a little bit easier when you can acknowledge that. I love the poem Number 76 which talks about dead things that are still and rigid, so strong and invulnerable – whereas live things are very tender and easy to break. As I said in that note, “to be alive is to be vulnerable.”

On the relevance of Taoism today:

Ursula: Lao Tzu is very relevant at a time like ours. We’re in one of those big yin-yang movements, and the yang is so extreme. But then it will do what all extremes do, it’ll suddenly begin turning into the opposite. There’s another part of Taoism that we haven’t discussed that is part of my view of the world – extremes always do implode and begin to turn into the other thing.

Thoughts? Comments? I welcome them.