“Hi, I’m Troy McClure. You may remember me from such nature films as “Earwigs, Ew!”, and “Man Versus Nature: The Road to Victory.”

The Simpsons started life as a quirky satirical parody of the typical American middle-class family three decades ago and has since become a cultural touchstone for entire generations of viewers. There’s not much the longest running sitcom in US television story hasn’t spoofed and parodied, and that includes humanity’s relationship with nature. Season ten’s Bart the Mother is not the only environmentally themed episode of the series, but it is my personal favourite. As the last episode voiced by the legendary Phil Hartman (RIP), Bart the Mother is not only an intriguing and hilarious story about the consequences of introduced species, but also explores the mentality with which we engage with the world around us.

After observing Nelson’s violent behaviour at the Family Fun Center, Marge warns Bart against hanging out with him. Naturally, Bart sneaks off to Nelson’s where they test out a newly won BB gun. Succumbing to peer pressure, Bart accidentally shoots and kills a nesting mother bird.  Marge discovers the dead bird and is devastated at her son’s actions. Feeling remorseful, Bart takes the two eggs in the nest home and tries to hatch them in his treehouse. Initially suspicious of her son’s secrecy, Marge is pleasantly surprised to discover that Bart is trying to make amends for his misdeed. The eggs finally hatch, but instead of chicks, a pair of vicious looking creatures emerges.

Taking them to the Springfield Birdwatching Society for identification, Marge and Bart discover that they are in fact Bolivian tree lizards, an invasive species responsible for the demise of many native birds and must by law be exterminated. After developing a bond with the hatchlings, Bart refuses to hand the lizards over and instead releases them to freedom.

Much to everyone’s surprise, the lizards turn out to be a blessing, dining on the town’s pesky pigeon population. Bart is thanked and praised by Mayor Quimby, but Lisa worries about the long-term ramifications of the introduced lizards. Principal Skinner reassures her that releasing other non-native species will keep the lizards in check.

“It’s already wiped out the dodo, the cuckoo and the nene. And it has nasty plans for the booby, the titmouse, the woodcock and the titpecker.” (Principal Skinner)

David X. Cohen, the writer of this episode and the creator of Futurama (one of my favourite shows) based the fictitious Bolivian Tree Lizard on a composite of real animals, including fossilized remains of egg-devouring dinosaur Oviraptor, the parasitic brooding habits of the cowbird, and real life gliding lizards called the draco or the flying dragon (Wikipedia).

Watching this episode reminds me of the many infamous real-world examples of invasive species. Cohen himself was partially inspired by the historical introduction of the cane toad to Australia to deal with beetle infestations on sugar cane crops. Released into an environment with no predators capable of handling its toxins, the amphibian proceeded to have devastating effects on the continent’s ecosystems and decimated various native populations of reptiles.

Exotic floral and faunal introductions are major environmental and economic problems today. Two species of Asian carp (silver and bigheads), escaping into the Mississippi from aquaculture farms in the early 1990s, have taken over major waterways and are poised to slip into the Great Lakes despite extensive efforts to keep them in check. Kudzu, known as “the vine that ate the south”, outcompetes and shades out other species for light and as a result, has spread through much of the continental United States. Speaking from personal experience, I am reminded of my volunteering stint on the Hawaiian island of Kauai, working to control the spread of Kahili Ginger and Strawberry Guava plants and preserve the more culturally valued and biodiverse Koa and Ohi’a Lehua forests.

“Our top story, the population of parasitic tree lizards has exploded, and local citizens couldn’t be happier! It seems the rapacious reptiles have developed a taste for the common pigeon, also known as the ‘feathered rat’, or the ‘gutter bird’. For the first time, citizens need not fear harassment by flocks of chattering disease-bags.” (Kent Brockman)

Invasive species are often portrayed as evil villains in the popular media, as unstoppable juggernauts that wipe out hapless native flora and fauna and leave ecosystems forever altered and diminished in their wake. Bart the Mother subverts that particular narrative; the lizards were actually beneficial to eradicating another introduced nuisance species. I enjoyed this unpredictable twist because it highlights the chaotic and contingent nature of life itself.

Unfortunately in the real world, the negative economic, cultural, and biological effects of invasive species tend to outweigh potential benefits. As climate change accelerates and exacerbates shifts in species distribution ranges, fundamental changes to existing ecosystems are inevitable. We are constantly forced to make hard choices on what we wish to save and what we are willing to live, and to adopt management and coexistence strategies necessary to meet those specific goals. 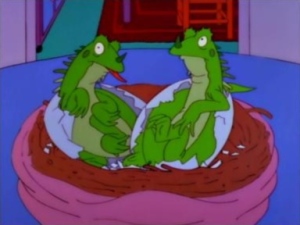 Besides its obvious ecological themes, Bart the Mother is also a character-driven episode. Throughout the series, Bart is depicted as a mischievous and rebellious underachiever and a constant agent of chaos. But at the same time, he is at his core a good kid with an inner moral compass. In Bart the Mother, we are provided with a glimpse of this aspect of his character. While he succumbs to peer pressure from Nelson, it was not his intention to harm the bird; the gun’s crooked sight led to the tragedy. Bart feels terrible and attempts to hide his actions from his mother, not wishing for Marge to regard him as a violent and destructive killer. This characterization is actually inspired by a real world experience by the producer of the episode:

Producer Ron Hauge came up with the idea of someone shooting a bird and feeling guilty about it. Hauge told the staff a few weeks before Cohen started writing the episode that when he was 13 or 14 years old, he accidentally killed a bird after he got a Wrist Rocket slingshot, and took a shot at a bird that he thought was “far, far away.” Hauge said his friends were excited about it, but he was “dying inside.” (The Simpsons: The Complete Tenth Season DVD commentary)

After his action, Bart devotes his energy towards becoming a guardian to the orphaned eggs, accepting them even when they hatch into bird-eating lizards. It’s refreshing to see Bart push past traditional notions of masculinity and femininity to become a nurturer and protector who exercises empathy, compassion, and responsibility. That’s a lot of maturity displayed by a boy perpetually stuck at the age of ten.

The Mentality of Fixing

By far the most memorable and funniest part of the episode for me is its conclusion:

Skinner: Well, I was wrong. The lizards are a godsend.
Lisa: But isn’t that a bit short-sighted? What happens when we’re overrun by lizards?
Skinner: No problem. We simply unleash wave after wave of Chinese needle snakes. They’ll wipe out the lizards.
Lisa: But aren’t the snakes even worse?
Skinner: Yes, but we’re prepared for that. We’ve lined up a fabulous type of gorilla that thrives on snake meat.
Lisa: But then we’re stuck with gorillas!
Skinner: No, that’s the beautiful part. When wintertime rolls around, the gorillas simply freeze to death.

This exchange has stayed with me throughout my academic, professional, and personal life. The scene obviously parodies past mistakes made in biological control; many exotic species have been purposely introduced as biological solutions, only to have things go terribly awry, with the introduced species having worse impacts than the species they were brought in to control.

But for me, the scene strikes deeper and goes beyond the realm of pest management and conservation biology; it also speaks of the mentality with which we view our role in the world. I am always struck by how close Principal Skinner’s mentality mirrors the mindset of many. Because we believe that there is always something wrong with the state of the world, we are not content to let things be. We adopt the role of problem solvers, working diligently to improve the world for the betterment of all.

But as Abraham Maslow once stated, “he that is good with a hammer tends to think everything is a nail. By adopting the narrative that the world is a place that needs fixing, we see problems that need solving everywhere we look. We devote our energies in an attempt to solve them without regard for potential systemic consequences. As a result, our elegant solutions frequently morph into Chinese needle snakes and snake-eating gorillas. Unfortunately, our gorillas don’t simply freeze to death. They stay with us, coming back to affect us and the world we depend on in completely unpredictable ways.  Who would have guessed that detergents developed for better cleaning power would lead to eutrophication? That better and safer refrigerants would lead to the depletion of the ozone layer? This mentality continues today with the age-old notion of geoengineering as a way to manage the planet’s climate. When simple technological solutions are applied to complex socio-economic and environmental problems, it is not surprising that unforeseen and increasingly intractable problems continue to pop up when the systemic causes remains unaddressed. I am reminded of a passage from last week’s entry by Masanobu Fukuoka, author of The One Straw Revolution:

“Human beings with their tampering do something wrong, leave the damage unrepaired, and when the adverse results accumulate, work with all their might to correct them. When the corrective actions appear to be successful, they come to view these measures as splendid accomplishments. People do this over and over again. It is as if a fool were to stomp on and break the tiles of his roof. Then when it starts to rain and the ceiling begins to rot away, he hastily climbs up to mend the damage, rejoicing in the end that he has accomplished a miraculous solution.” (p.18)

The end scene of Bart the Mother makes me wonder: Instead of doing, are we as a species capable of not doing? Can we take the time to understand context and consequence before jumping to implement solutions? Can we focus our energies on prevention before resorting to mitigation? Can we accept a fundamentally different narrative of the world that doesn’t need fixing?

Next Up: A different narrative for environmentalism and conservation.

Images of The Simpsons © 1998 Fox. All rights reserved.