Having recently celebrated its 25th anniversary, the Legend of Zelda is one of the most iconic and celebrated franchises in videogame history. What I love about the series is that it continually incorporates inspiration from various real-life mythologies into its own world. Each mainline iteration is a self-contained story, but they can all be seen as discrete reinterpretations of one central legend, a core narrative that revolves around the hero of Courage, aided by the heroine of Wisdom, embarking on a quest to prevent the villain of Power from acquiring the Triforce, a sacred artifact that grants its wielder’s desires. Two games in the series struck me as being particularly intriguing in the content and delivery of their monomyths from an Ekostories perspective. The first I’ll touch on is The Legend of Zelda: The Wind Waker, released for the Gamecube in 2003 and re-released as a HD remake for the WiiU in 2013.

The story of Wind Waker starts out in a sleepy village on the appropriately named Outset Island. Link, the young protagonist destined to become the Hero of Courage, leaves his home and journeys across the Great Sea to rescue his sister from the clutches of Ganondorf, a reawakened evil spirit who seeks to restore the ancient kingdom of Hyrule, preserved in stasis underneath the sea. Link is aided on his hero’s journey by Hyrule’s old king, a restless spirit who takes the form of a talking boat, and by Tetra, a pirate captain eventually revealed to be the Heroine of Wisdom. With their help, Link succeeds in defeating Ganondorf. Using the power of the Triforce, King Hyrule wishes for the old kingdom’s destruction once and for all, entrusting the world in the hands of the new generation.

Wind Waker’s narrative carries messages about childhood and maturity, hope and despair, stasis and change. More than any other game in the series, Wind Waker also has themes and metaphors that remind us of our relationships with the environment and the obligations we have to future generations. Three notable strands have emerged on my replays over the years. The first relates to the setting of the world. The second pertains to the motivations of the characters from the past. The final stems from the game’s surprising conclusion.

Life in a Degraded World

A series of tapestries outlines the events that led to the world of Wind Waker. Drawing inspiration from various deluge myths, a cataclysmic flood washed away the once vast and fertile land of Hyrule, leaving behind only scattered islands amidst a vast and sterile ocean. The consequences of this environmental calamity are still felt centuries and generations later. Many of the races traditionally featured in earlier Zelda games have been affected drastically. According to the game’s creator, the freshwater-dwelling Zoras people have gone extinct; the only one in the game is a ghost.

The Gorons, once a proud race that inhabited mountains and volcanoes, have been decimated in number; only a few exist as nomads, eking out livings as traders on desolate isles. Most of the remaining races have settled on the larger islands, leaving a relatively barren world for the player to explore.

Obvious parallels can be drawn between the world of Wind Waker and a world affected by climate change. While the causes of the catastrophic event are different, the implications posed by a rapid change in sea levels are very similar: A significant and irrevocable loss in culture and biodiversity. Looking beyond the colourful visuals, Wind Waker actually takes place in a vastly degraded and post-apocalyptic world. Its inhabitants are displaced environmental refugees and survivors from collapsed civilizations, clinging to their islands as oases upon an immense pelagic desert.

Despite this grim reality, hope survives. The various races that inhabit the world have learned to cope and live peacefully with their surroundings. Windfall Island, the largest remaining settlement, has grown into a small but vibrant hub of activity. The Rito Tribe has learned flight from their island’s deity to traverse great oceanic distances. The isle of Forest Haven is a source of renewal and regeneration for the world. Its inhabitants, the Koroks, have evolved from the Kokori, the original children of the old Hyrule forest; they constantly journey out to far off islands in an attempt to reforest the world, returning the Forest Haven to celebrate in musical rituals that result in more seeds for planting.

These are all encouraging signs of resilience from nature and culture. Life, people, and communities can survive and regrow even in difficult circumstances given enough time. Unfortunately, they are all threatened by an evil from a past world: Ganondorf, the main villain and a recurring threat in Zelda mythology.

Motivations of Ghosts Past

Both Ganondorf and King Hyrule are restless spirits from a world long gone; both yearn for old Hyrule’s eventual return to glory. The Ganondorf of Wind Waker is a more nuanced and sympathetic antagonist than his other incarnations in the franchise. His ambitions for power and control stemmed from a genuine desire to offer a better life for his people. Growing up in the harsh and unforgiving Gerudo desert, he raged against the hand dealt by the goddesses of creation, hungering for the fertile fields of neighbouring Hyrule.  Like so many conflicts in the real world, his lust of Hyrule was primarily motivated by an uneven distribution of natural resources:

“My country lay within a vast desert. When the sun rose into the sky, a burning wind punished my lands, searing the world. And when the moon climbed into the dark of night, a frigid gale pierced our homes. No matter when it came, the wind carried the same thing… Death. But the winds that blew across the green fields of Hyrule brought something other than suffering and ruin.”

With the old kingdom preserved beneath the Great Sea serving as the ultimate temptation, Ganondorf reawakens to claim and control Hyrule for his own. He is unable to let go of this past, despising the world in its present state along with the people who inhabit it, hungering only for the image of the world that was – the Hyrule he coveted. He scoffs at the futility of hope and life, driven only to obtain the power to restore the old: 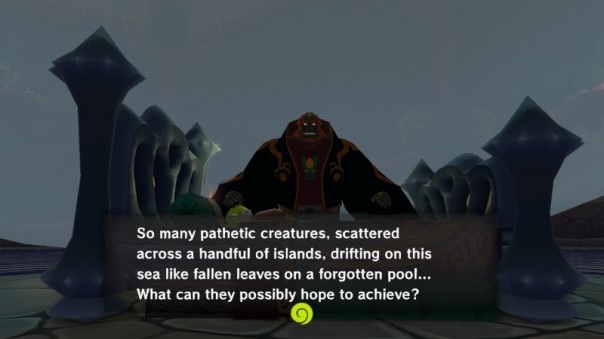 Initially, King Hyrule only uses Link as a pawn to prevent Hyrule from falling into Ganondorf’s hands. But as he becomes more involved in adventures with Link, he begins to see the courage, wisdom, and potential exemplified by the people of this new oceanic world. He starts to recognize that this supposedly barren realm still harbours hope, and is worth saving. The king comes to understand that like Ganondorf, he has been blinded by the past to see the possibilities of the present:

“My children… Listen to me. I have lived regretting the past. And I have faced those regrets. If only I could do things over again… Not a day of my life has gone by without my thoughts turning to my kingdom of old. I have lived bound to Hyrule. In that sense, I was the same as Ganondorf.”

This realization leads to the unexpectedly poignant conclusion to Wind Waker’s tale.

An Apology to the Next Generation

Defying expectations, the game does not end on a traditional positive note. Although Ganondorf is vanquished, Hyrule is not restored. The world continues to exist in its degraded state. Confronted with the greed and ambition of Ganondorf, King Hyrule realizes that as long as the old kingdom exists as a temptation, there can be no future for the people of the world.Using the ultimate power of the Triforce, King Hyrule wishes for the final destruction of his submerged kingdom to release the next generation from the mistakes of the past:

“Gods of the Triforce! Hear that which I desire! Hope! I desire hope for these children! Give them a future! Wash away this ancient land of Hyrule! Let a ray of hope shine on the future of the world!”

In a final heartfelt exchange, he asks for Link’s and Tetra’s forgiveness, for the world he leaves behind for them is an uncertain and bleak one. There is no more hope left from the past; only possibility lies from the future:

“I want you to live for the future. There may be nothing left for you… But despite that, you must look forward and walk a path of hope, trusting that it will sustain you when darkness comes. Farewell… This is the only world that your ancestors were able to leave you. Please… forgive us.”

Like Earl from Dinosaurs, the Old King expresses regret in his parting words to Link and Tetra, lamenting at the impoverished world his generation has left. He is filled with remorse at how men like him and Ganondorf have caused so much destruction and suffering in the pursuit of their own agendas. Whether justified or not, he believes that he has failed in his responsibilities as a steward of the world. Admitting his mistakes, he finally entrusts the world to the next generation, hoping that they will be able to do a better job with it than he did.  For me, this fascinating and unexpected ending triggered many important and complex questions that pertain to the real world:

Next Up: The dark, modern, twisted fairytale.