Growing up in the Pacific Northwest, I was fortunate enough to have access to a great public television network. Its programs sparked my love for cooking, cultivated my love for wacky British humour, and broadened my knowledge base and enthusiasm for science and the natural world.

One of the network’s most memorable shows, Alone in the Wilderness, aired frequently during pledge weeks. The documentary revolves around Dick Proenneke, a retired mechanic, carpenter, and handyman, living in solitude at Twin Lakes in Alaska’s Lake Clark National Park. Alone in the Wilderness depicts Proenneke’s first year out in the wilderness in 1968 as he single-handedly builds his log cabin. Most of the colour footage used in the film was shot with a stationary 16mm tripod-mounted camera and accompanied by commentary on his day-to-day experiences.

In the film, Proenneke fully embraces the formidable challenges of living alone in the Alaskan wilderness. To be able to live in solitude in such a harsh environment requires all of his considerable skills and life experience, along with an appreciation for the wonders for nature. The life he chose to live demanded all that he is, but it provided him with deep satisfaction and joy. His story, told through Alone in the Wilderness, inspires me to examine the ideas of living simply and respectfully with one’s surroundings.

“I went to the woods because I wished to live deliberately, to front only the essential facts of life, and see if I could not learn what it had to teach, and not, when I came to die, discover that I had not lived.” (Thoreau, Walden).

According to his lifelong friend Sam Keith, it was a bout of rheumatic fever that prompted Proenneke to reexamine himself and change his life (wikipedia). Upon his retirement, he chose to live away from people and civilization in the Alaskan wilderness. Living off the land with next to no support has a strong romantic appeal to it. For most of us, this lifestyle is too costly and too difficult to pursue; we are too attached to the conveniences of everyday life, too tied-down by the obligations and conventions of modern society, and too unskilled in the natural world to make this dream a reality. Proenneke, on the other hand, seemed to relish the opportunity to walk down a path rarely taken:

“It was good to be back in the wilderness again, where everything seems at peace. I was alone, just me and the animals. It was a great feeling, free once more to plan and do as I please. Beyond was all around me, my dream was a dream no longer.”

The experience served as a mental and physical test for himself. The wilderness offered him freedom, but did he have the physical abilities to live comfortably in a harsh environment? Did he have the mental fortitude to only have himself and the animals for company? He had to confront these questions in the beginning of Alone in the Wilderness:

“What was I capable of that I didn’t know yet? Could I truly enjoy my own company for an entire year? And was I equal to everything this wild land could throw at me. I had seen its moods in late spring, summer, and early fall, but what about the winter? Would I love the isolation then? With its bone-stabbing cold, its ghostly silence? At the age of 51, I intended to find out.”

In the end, Proenneke’s experiment was a success, and he would spend the next thirty-five years documenting his life through film and written journals of life at Twin Lakes.

One man’s respect for nature and culture

It is evident throughout the film that Proenneke harbours a deep sense of love for living creatures. Many of his ruminations revolve around encounters with local wildlife. He expresses empathy towards the mosquito-riddled caribou and takes delight in watching the winter antics of the wolverine. The appreciation he has for the beauty of nature shines through in his camera work and commentary:

“Close at hand, the mosses and grasses were full of tiny flowers. It is another world of beauty. The more I see as I sit here among the rocks, the more I wonder about what I am not seeing.”

Proenneke recognizes beauty in both the large and the small, accepting and appreciating all the mysteries of nature. He hunts and fishes only for subsistence; he never takes delight in taking another creature’s life and never revels in the thrill of the hunt. He does only what he must to survive, and no more:

“I opened and closed the season with one shot. The search for meat is over. I hated to see the big ram end like this, but I suppose he could have died a lot harder than he did.”

At one point in the film, he admonishes the wolves killing a moose calf seemingly for the sport of it, saying that they “lost a few points with me”. To me, these small scenes suggest that he is a thoughtful individual who understands the importance of living sustainably within the natural world.

Watching Proenneke living simply also brings a sense of appreciation for the things we take for granted; I am reminded of a scene where he became excited because his friend’s wife had knitted him several pairs of socks. Few of us would have given a second thought to such a gift. But they meant the world to Proenneke; his words conveyed his deep appreciation for this gift from civilization. Like the routine by Louis CK, Alone in the Wilderness reminds me that I was extraordinarily fortunate to be born in modern times. It reminds me that I should be thankful of my good fortune, and be grateful for the conveniences provided by today’s society. 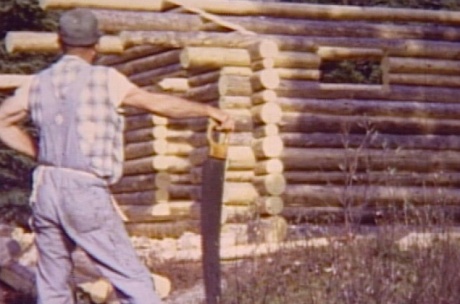 “Too many men work on parts of things. Doing a job to completion satisfies me.”

No matter how many times I watch his careful meticulous construction of his wooden cabin, I never ceased to be amazed. The same combination of intelligence, adaptability and strong work ethic that made him a great mechanic also made him an unparalleled outdoorsman.  Here was a man with the patience, skill, and endurance to hew his cabin logs, create his own locks, roof his house with moss, devise and construct a sled, even carve his own spoon.

Need a spoon? Make one!

In each of his creations, I see humanity’s ingenuity and creativity guided by foresight and moderation. He shows great skill and cleverness in his work, taking great pride in completing projects, but only makes what he needs, and never likes to waste. There is something meditative about watching him work, whether it is seeing him skillfully notch out round holes in each of the logs of his cabin, or creatively bending metal cans to make a set of kitchenware. These quiet scenes of doing help convey to me the deep sense of fulfillment that can be achieved through doing needed work, doing it well, and doing it to completion.

The notion of doing good, fulfilling, and needed work reminds me of an initiative started by Alla Guelber, one of my colleagues from school. Called the Meaningful Work Project, it explores the concept of work that benefits self, society, and the environment. The project asks the following questions:

Alone in the Wilderness captures my attention every time I come across it.  It is an examination of what is necessary in our lives, but does not preach about the virtues of a simpler life. The skillset required to live off the land is an extensive one; few of us can do what Proenneke does. Proenneke is not only an unparalleled outdoorsman, but also a capable farmer, forager, fisherman, and chronicler. He reminds me that off-the-grid living is not easy: it takes ingenuity, demands patience. But as he demonstrates throughout the film, it can be an immensely soul-satisfying way to live. Thanks to his footage, musings and journals, I am able to glimpse a bit of the world as he saw and lived it. Whether he did it to provide a record for his family or for a wider audience, he has become a great educator, storyteller, and champion for living in balance with nature.

Next Up: Stories from a legendary game franchise.

Images from Alone in the Wilderness © 2004 Bob Swerer Productions. All rights reserved.