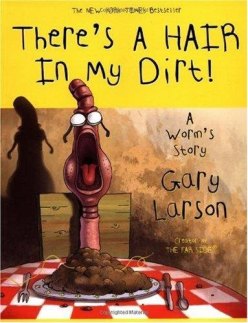 My first exposure to Gary Larson’s work came at the impressionable age of five; my uncle had left behind The Far Side Gallery at my grandmother’s place. Reading very little English at the time, I flipped through the collection of cartoons full of animals and people in strange situations and enjoyed them as silly drawings. As I came to understand the captions of those comics, I saw and appreciated Larson’s work in a new light.

In hindsight, the Far Side comics probably did a number on me growing up, shaping and twisting my sense of humour in all sorts of strange, quirky, and unhealthy ways. Two decades later, I continue to find Larson’s work hilarious and bizarre. Imagine my delight and surprise when I discovered that he had published another book after his retirement from the comic business. I immediately ran out to the local library (an unabashed plug for this gem of a public resource) and checked out There’s a Hair in my Dirt! A Worm’s Story. Like in many of his Far Side comics, Larson’s passion for the natural world shines through within the pages of this twisted ecocentric version of a fairy tale.

The story begins with a young worm sitting at the family table being served a customary meal of dirt. He is shocked to see a hair in his dirt. Already upset at being a worm, Junior lashes out at his family, complaining about his species’ lowly status on the food chain. His father, a cantankerous and grizzled invertebrate, admonishes his young son and proceeds to tell him a tale. The fable revolves around Harriet the fair maiden and her delightful stroll through nature. As the story unfolds, it is gradually revealed to the reader that the nature as seen by Harriet is not at all representative of reality, but merely reflects her flawed anthropocentric perception of it. The story ends when the young worm realizes that the hair in his plate of dirt is actually the hair from a long dead Harriet. The family begins to laugh maniacally, and the book concludes with a bunch of worms staring up and smiling sinisterly at the reader.

Dirt represents a rather subversive take on modern sanitized fairy tales from the beginning. The title itself foreshadows a shift in perspective – it is the hair that is the impurity, not the dirt. This is the world from the lowly worm’s perspective, but the narrative of Dirt emphasizes that this world is no less vital to the continued functioning of the world than the one we inhabit. In his cranky speech, Father Worm describes the critical role earthworms have in ecosystems:

Father Worm sat back, stretching himself out to his full, glorious three and a half inches. “Take us worms, for example. We till, aerate, and enrich the earth’s soil, making it suitable for plants. No worms, no plants; and no plants, no so-called higher animals running around with their oh-so-precious backbones!”

He was really getting into it now. “Heck, we’re invertebrates, my boy! As a whole, we’re the movers and shakers on this planet! Spineless superheroes, that’s what we are!”

Even the conclusion is unexpected: Junior Worm expects an ending in which Harriet lives happily ever after. But Father Worm ends the story with Harriet dying due to a viral infection, with the worm family rejoicing. Once again, the reader is asked to view the world from a different perspective. Harriet’s death is, in reality, a great boon to the worms, who excel at breaking down dead organic matter, including the hair that was on Junior’s plate. It is indeed a happy ending – just not for Harriet.

“Nature is to be loved, cherished, admired, and yes poetically celebrated (Why not? We’ve depended on it for millions of years), but, above all, understood.”

Dirt’s central message to the reader is that it is not enough to simply appreciate and love nature; we must have the passion, curiosity, and wisdom to attempt to understand it. Simply admiring nature and dwelling on its beauty can lead to an overly romantic perception of the natural world. Like the works of Le Guin and Pollan discussed in past Ekostory entries, Larson demonstrates an understanding that nature also includes ugliness, chaos, death, decay, and destruction. In reality, nature is neither kind nor cruel, but rather indifferent. This can be an unsettling realization for many. Thinking upon this subject, I am reminded of a quote by Stanley Kubrick, celebrated filmmaker, attempting to address the issue of how to cope in an uncaring, inhumane universe:

“The most terrifying fact about the universe is not that it is hostile, but that it is indifferent. If we can come to terms with this indifference and accept the challenges of life within the boundaries of death, our existence as a species can have genuine meaning and fulfillment. However vast the darkness, we must supply our own light.”

One source of light is scientific understanding. Harriet in the story is depicted as a naive individual ignorant of biology and ecology, unable to understand the connections and relationships between her and her surrounding environment. She unwittingly feeds the large and aggressive grey squirrels, thinking them cute and cuddly, not realizing that they are an invasive species that is out-competing the native red squirrels. She praises the Amazon ants for being caring parents, when they are in reality raiding eggs from another colony. Harriet dooms a tortoise by dropping it into the pond, not recognizing the different morphologies and adaptive traits of tortoises and turtles. She condemns a forest fire as something ugly and undesirable, not understanding the vital role that fire plays in the renewal of forest ecosystems. (To be fair, the role of fire in forest ecosystems has only been realized in recent decades, so I’ll cut her some slack.)

In the conclusion of the fable, Harriet acts unwisely out of her misguided perception of what is good and what is bad, killing a snake that was about to eat a mouse. Unfortunately, the disease-riddled mouse turns around to infect Harriet with a virus, causing her ultimate demise.  This tragic result was due to Harriet’s ignorance and lack of knowledge about the biology and ecology of her surrounding environment. Father Worm summarizes the problem with Harriet at the end of the story:

“You see,” Father Worm began, “Harriet loved Nature. But loving Nature is not the same as understanding it. And Harriet not only misunderstood the things she saw – vilifying some creatures while romanticizing others but also her own connection to them.” Father Worm paused, his eyes narrowing. “Ah, connections, Son. That’s the fateful key that Harriet missed, the key to understanding the natural world.”

Dirt reminds the reader to be mindful and appreciative of the natural world while cautioning us against projecting our own biases out towards nature without a solid understanding of how it works.What we perceive as cruelty, aggression and suffering are all elements in nature as well.  As Pollan stated in Second Nature, “nature is probably a poor place to try to find values”. Meaning is derived from culture and in our relationship with nature, but not nature itself.

Humour to Connect and Educate

“There’s a Hair in My dirt! Is hysterical… more entertaining than any science class I remember and the foreword by biologist E.O. Wilson proves it’s legit.”

– Washington Post Review from the back cover of Dirt

Many of the illustrated pages of Dirt have both subtle and not so subtle messages of biology and ecology embedded in them. Larson’s passion for biology is evident in Dirt and in his Far Side comics; he is a master at utilizing humour to connect and educate people about biology and the natural world. There is something about his delivery that is so distinctive, bizarre, and self-aware that it resonates with people from a wide range of backgrounds.  I constantly see Far Side comics taped to office doors, work cubicles, and used at the beginning of presentations and conferences.

What I find most fascinating in Larson’s work is that he draws inspiration from both culture and nature, delighting in placing animals and other creatures in surreal human situations. Organisms ranging from cows to spiders to amoeba are routinely portrayed anthropomorphically. By contrast, human beings are often depicted as dim-witted creatures. In one sense, Larson’s work often attempts to even out the differences between nature and culture, making animals more like humans and humans more like animals. This approach makes it easier to relate and appreciate the non-human world. He reminds me that human beings are at their core animals too, with biological urges no different from the spider or the cow or the amoeba. This is a refreshing and sorely needed reminder in today’s society, lest we forget and become too detached and disconnected from nature. We are still beings of biology, connected to the ecological world, as E.O. Wilson writes in the foreword of Dirt:

“The point is that we, too, are organisms. We are subject to the same physical laws, still tied to the planet, totally enmeshed in food webs, energy flows, nutrient cycles, predator-prey cycles, territorial imperatives.”

Dirt presents an accessible and non-threatening approach for getting people of all ages to think more deeply about the natural world. The use of humour in stories to convey the essence of the alien, the non-human, and the incomprehensible can provide perspective, create resonance, and stimulate the imagination, all elements crucial to the formation of environmental awareness. That’s why I think There’s a Hair in my Dirt! is a great Ekostory.

Images from There’s a Hair in my Dirt: A Worm’s Story © 1998 Gary Larson. All rights reserved.